I had my best (solo) Spec Miata finish of the year on Saturday at the EMRA Sprints.  The Sprints were held just before the EMRA Enduro race that afternoon/evening (where Bad Al Bell and I combined for a 3rd Place finish).  I finished in 4th Place in a field of 9 SM Spec Miatas.  This is also the first race where I finished in the top half of the pack.

The truth as shown in the videos below (unlike some fishing stories) is that I was in 3rd Place with a half lap to go when I blew a shift and the #72 Blue Miata slid past me.  I was a half lap short of a dual trophy day.

The race was actually even more exciting than that (at least for me).  I started out in 5th place and by turn 4 of the fist lap I had dropped down all the way to 9th (last) place.  The race starts have the highest incidence of crashes and I see from my videos that I have a tendency to let the cars sort themselves out a bit (definitely a bit too much).

I have included the whole race as posted in three segments on YouTube.  You can see by watching the first minute of part 1 how I drop off to last place when the red #14 car passes me.

Over the course of the 18 lap race, I pass all of the SM Miatas except those in 2nd and 1st place.  I race in 3rd place ahead of the blue Miata for several laps after passing him.  It is on lap 18 that the #72 blue Miata passes me back to take 3rd place back. This part can be seen towards the end of part 3 posted below.

Note, there are other race classes mixed in with my Spec Miata SM class.  You can see the little yellow formula cars as well as an occasional Volvo!  These are not in my class but still were in my way from time to time.

Part 1 – The Start of the race – where I immediately fall behind to 9th place.

Part 3 – Where I finally catch Blue #72 Miata and move into 3rd place until missing a shift on the last lap.

The headline sounds nice, but I think my grandmother could have taken 3rd place with Bad Al Bell as a partner. The EMRA 4 hour Enduro race requires two drivers. I did my part by not leaving the car in a tree. Al did his part by passing all of the cars that I had let get in front of me. That is what I call teamwork!  It was the longest race I have done in my short career.  I was in the car just under 2 hours before I turned it over to Al.  A huge thank you to Mike Collins and the Meathead Racing team for all of their help!

Here is a photo of the trophy. 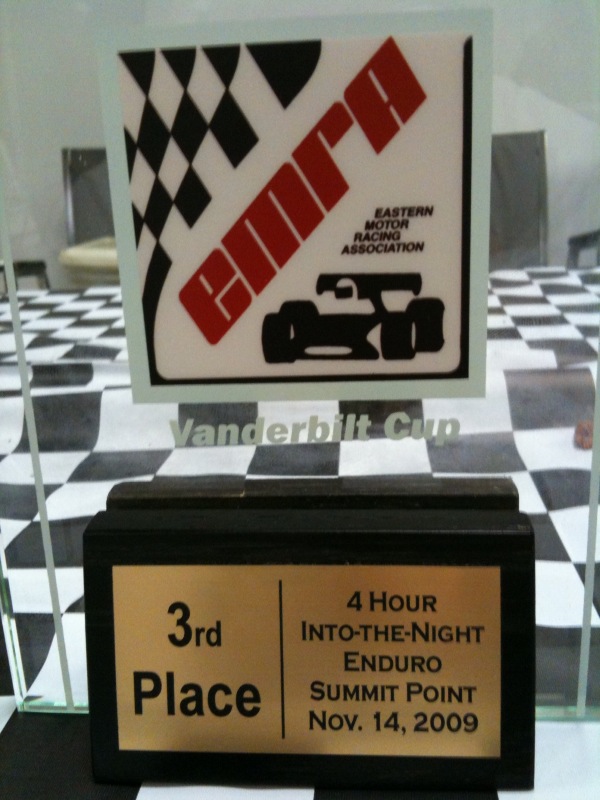 This is a quick video of Randy Ramos from Meathead Racing heading off into the gravel pit in Turn 1 at the practice session for the EMRA 4 Hour Enduro.  Randy was being followed by Bad Al Bell in my car as we took some test laps.  They both pass the white Miata before turn 10 and head down the straightaway towards turn 1.  The only issue is that is was really wet and Randy decided to brake a little late…  Nothing a little tow truck action could not sort out.  It was a great day at the Enduro and the Sprints that preceded them.

Since I have gotten fairly good at downloading my videos from my TraqMate and editing them, I decided to post a short video of myself sliding off the track in my final race of the year.  I recovered fairly well and still finished the race (after setting my personal best lap time in a few of the previous laps).

You can see the red #14 car sneak up my right side in turn 5 as we stack up into a line of cars.  He stays inside me for turn 6.  Instead of falling in behind him, I keep my line off his left bumper – and run out of track.  This is the old, “watch the track – and not the guy in front of you” lesson.

I finally got around to posting a video from my TraqMate race cam.  I actually used Windows 7 and Movie Maker to do it – even though I bought Final Cut Express 4.0 for my Mac to do the job.

The video is a short, 10 second, clip of two cars spinning out in front of me in turn 10.  I added it again here to avoid chasing the link.