Now that I have moved cahallracing.com to a proper blog and updated my SCCA profile, it is time for me to think of actually racing in a car.   It has been almost a year since I last raced – at MARRS 1 in April of 2017.

I checked with my two esteemed male siblings about their plans for MARRS racing this year.  Unfortunately, due to work issues, Larry will not make it out this year aside from a possible PDX.

My younger brother Bob is all for it, if he can only get around to renewing his SCCA license and the likes.

So the official plan for “Cahall Racing” this year is to try to race all of the 2018 MARRS series – both the Summit Point races and “away” races.  This may be very tricky without Larry’s motor home support and Meathead Racing relocating out to Chantilly temporarily.

Maybe – if the MARRS series goes well and the cars hang in there, I will be able to do an SCCA Majors race at the ARRC down in Atlanta in November.

The SCCA now let’s you claim your profile URL on SCCA.com.  Not sure how long that has been there – but I finally claimed mine at ted-cahall.  So crafty of me.  While I was there I added some photos that are also up on my cahall.com front page.  It needed something as I had not logged in for two years and never thought it would end up public facing.  Maybe Steve Sturm will make one too since he is such a beast!

Mike Collins – you should make an SCCA profile and link it to your blogs as well.

Today the old hand-crafted cahallracing.com HTML site moved over to WordPress.  WordPress is so much simpler to manage and it was time to modernize and simplify.   Additionally, cahallracing.com also now hosts my old WordPress blog that previously was on wordpress.tedcahall.com.

Unfortunately, when Webshots.com moved away from being a user based photo storing site, I was not quick enough to grab all of my photos.  So a number of the photo links were broken on the old site, and continue to be broken now here on its new home.  Worst of all, for many of them, I cannot find the original photos anywhere. I have been looking through old hard drives, DVDs and CDs to see if I can find them.  I will also at least remove the broken links.

For now, the old  static “cahallracing.com” site is still alive.  It currently lives at cahallbrothersracing.com – but at some point I will likely kill it.  For SEO reasons, wordpress.tedcahall.com now redirects here with a 301 to make the search engines happy. It was fun making the old date format go away in the rewrite rule. I love apache!

Now both of the old sites live in one place – here – on cahallracing.com.

The Washington DC Region (WDCR) or the SCCA awarded Ted Cahall with the Regional Executive award for the development of the marrspoints.com race tracking web application!

Ted Cahall of Cahall Racing has been hard at work on the MARRS Points tracking application for the Washington DC Region’s, Mid-Atlantic Road Racing Series (MARRS). Updates to this site have been delayed by that work. There are many new cars and most of the cars shown here have been sold, retired, or died an untimely death. Currently the Cahall Racing Stable contains four (4) 1999 Spec Miata (SM) cars, one (1) 2003 Spec Miata (SM) car, and a 2006 MX-5 that can be driven in the STL or SM5 classes. The motorhome is still chugging along as well.

Cahall Racing has updated their car section with the latest information on their SM, SM5, and STL race cars.

Larry and Ted Cahall will welcome a new addition to the racing family this weekend.  No Larry is not pregnant.  Their younger brother Bob Cahall will join them this year for a few races after spending the weekend of March 19th in SCCA Club Racing Driver’s School.  That rounds out all of the Cahall brothers for the team.  It is doubtful any of their five sisters or numerous nephews, nieces, etc. will join them on the track in the future – although niece Katie is a strong possibly when she finishes her computer science degree…

Larry Cahall got his Regional and then National SCCA Club Racing licenses last year and competed in the Mid-Atlantic Road Racing Series (MARRS) with Ted.  Ted has been racing competitively (or not so competitively depending on who you ask) for two years now and raced in the SCCA Club Racing National Championships last September.  Ted also finished 10th in net points and 8th in raw points for the MARRS series last year.

If shear lack of fear and injury make a great racer, Bob will be beating Ted fairly soon.  Since skill matters, it may take a few races.  This is why Ted will not lend Bob one of his cars. Lack of fear plus lack of skill often equals bent metal.  Judging from his childhood, Bob can take a good hit though and still keep ticking.

More to come as Bob completes racing school and the Cahall Brothers Racing team joins the field in April for MARRS 1.  My parents are likely rolling in their graves (very near the Nelson Ledges track in Ohio btw).  At least we are getting along and working as a team now.

When I started driver’s school in Washington state back in 2005, I had planned to race my 2001 Z06 Corvette once I got my competition license.  Not an 800HP purpose built racing machine, but good enough to feel like I was racing a real machine.  So I thought.

By the time I was really ready to begin racing with the SCCA in early 2009, I had moved to “the other” Washington – DC – and still had not modified my Z06 to meet the SCCA Club Racing requirements.  Therefore, I needed to rent a car for the drivers school required to get my license.  It was a reasonable idea, I thought, since I was not sure just how terrible I really would be at this “sport”.  Also the thought of destroying a perfectly good Z06 Corvette by welding a roll cage to the frame, etc. seemed wasteful if my adventure ended up being short lived.

In checking with some really nice folks at the SCCA office, I determined that I basically had two choices to rent for driver’s school: a Mazda Miata or a Ford Pinto. The Pinto had the bigger engine – but those rear-end fire death lawsuits of the 70’s and 80’s brought back a few grim memories.  Plus, whoever thought a Pinto was a race car?  At least the Miata was the Japanese version of the MG or the Triumph or something… 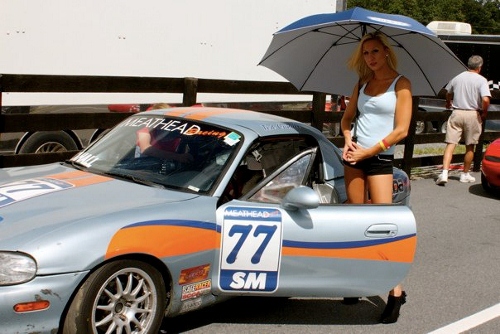 I knew some future teasing was coming when even the Miata drivers referred to their cars as “a woman’s commuter car”.  Actually, the term was a little more colorful, but I try to keep this blog as PC as possible…  Oh, and BTW, almost every guy I race with wishes more women would join the sport.  Just men being men to say something “cute” with low HP belongs to a woman…  But I digress…

I rented three different Spec Miatas from Meathead Racing over the next few weeks.  I finished driver school and some non-competition driving events and decided to buy a Miata from them.  It was fairly cheap ($8k-$15k for a fairly good setup) and it meant I did not need to commit my Z06 to the welding machine just yet.

Well it has been two years of racing Miatas now and I am totally committed to them and the sport.  There is a very simple reason: GREAT competition.  In Summit Point, WV where I race, there are about 80 Miatas split into two major groups of 40 each race weekend.  That is a lot of cars on the track – and a lot of wheel-to-wheel competition.  When I raced in the SCCA National Championship for Spec Miatas this past September, there were 63 cars in the race!  That was really intense competition.

To put it into better perspective, if I had converted my Z06 Corvette into a T-1 race car, most weekends I would have been one of only 2-3 cars in my class.  Not a lot of competition.  Sure I would get a trophy each weekend – but would it really mean anything?  Would I really be learning and getting better?  There were only 16 T-1 cars at the National Championships – and only 9 finished the race.  A pittance!

Looking at the bigger picture, for the SCCA, the Spec Miata (SM) class is the largest class with the most participants in 7 out of 9 regions for National races and 8 out of 9 regions for Regional races.  Only the “Spec Racer Ford” (SRF) group even comes close to the participation of the Miatas, and those are purpose built cars that are really closer to go-carts than real cars (just my opinion). For SCCA Regional races, 3043 Spec Miatas raced in 2010 while in the second largest class, SRF, only 2006 cars entered the same amount of races.

The Spec Miata is one of the least expensive automobiles available for organized racing.  Mazda still manufactures most of the engines and parts – for cars that are over 10 years old. There are more Miatas racing every weekend in the United States than any other type of car – period.

So if you want some good, cheap, high-intensity fun, rent a Spec Miata and head out to the track for a high speed driving instruction lesson.  You will be in some great company – and you may even decide to race them competitively.  You can see some photos of many of the Meathead Racing drivers in the last regional race of the year as well as the SCCA National Championships on Facebook thanks to Karen Dildei’s expert photography!

Cahall Racing is a team of brothers that race as part of SCCA Club Racing. The team came together over the years with Ted Cahall getting his regional and national license in 2009, followed by Larry Cahall getting his licenses in 2010.   In 2011, brother Bob Cahall rounded out the team by obtaining his Novice Permit at Summit Point, WV. Not only did Bob receive both his regional and national competition licenses, but he was also the first Cahall brother to compete in a national race in his rookie year.

Ted, Larry, and Bob want to thank Mike Collins and Meathead Racing for its continued support of their ongoing racing endeavors.

I had the pleasure of attending Rolling Thunder again this year.  I staged at Patriot Harley-Davidson in Fairfax, VA with approximately 10,000 other motorcycle enthusiasts to honor our military’s: fallen, POWs, and MIAs.  It is a wonderful event that culminates at our nation’s capital with numerous groups of riders crossing Constitution Avenue.

I filmed the opening police escort in addition to a few other groups as they made their way through the parade.  It was an honor to again pay tribute to our nation’s heroes.  Some photos of the event are on Webshots.