I know it sounds unbelievable.  I truly doubt drivers illegally hit 200 mph that often.  So when it does happen at all – it is a rare and unusual event.

Why?  Well first off, there are very few cars that can actually hit 200 mph.  I don’t own one and I own a 505HP Z06 Corvette and a 604HP sedan.  Additionally, for the cars that can hit 200 mph, it is hard to find a stretch of road long enough and straight enough to attempt it.  Of course there are banked tracks such as the Daimler test track in Unterturkheim or Volkswagen Group’s Ehra-Lessien test track  – but those take far more skill than just driving in a straight line.

It takes over two miles for most of the modern stock exotic sports cars (Ferrari 599 GTB, Lamborghini LP560) to hit 200 mph.  Finding two miles of straight, smooth pavement not is use by the U.S. highway system is a difficult task.  That is where the pros at World Class Driving come into play.  They have two locations that make this possible.  One in Miami for folks in the eastern U.S. and one in the Mojave desert for the left coast.

I highly recommend this program put on by World Class Driving.  It is run by professional race drivers and the cars are meticulously maintained.  Drivers are given a choice of any of three vehicles that have all been proven to reach 200 mph: a Mercedes-Benz SLR McLaren, a Ferrari 599 GTB, and a Lamborghini LP560.

The day starts out with some driving skill drills to make sure each entrant is capable of handling the cars in corners and at speed.  For the early part of the day, we were also able to drive a Ferrari F430, Lamborghini Gallardo, and a Maserati Granturismo.  Those exercises were really enjoyable as well with hard acceleration and hard braking in some of the world’s fastest and most exotic cars.  I must have done alright as they let me move onto the next segment of the training session.

In the next section, they test how well you will do out on the actual airstrip.  The main issue in the Miami course is that the airstrip is approximately 2 miles long.  Not quite long enough to hit 200 mph in a straight line and stop.  The driver is required to build speed on an auxiliary runway and then turn through two turns to head out onto the main runway at about 60 mph for the 200 mph attempt.  Even more interesting, after hitting maximum speed and entering the braking zone, the driver still does not have enough runway left to stop in a straight line – and must execute another turn back towards the auxiliary runway at about 50 mph!  It is a lot to master for any rookies out there that have not experienced high speed turns under acceleration or braking.  The Mojave runway is almost 3 miles long and does not have these issues.  So folks that want to just smash the gas and see what 200 mph feels like may want to try that.  Personally, I enjoyed the challenge that required some skill.

When we moved to the 200 mph attempts, we were told that we would be given four turns each.  Two test turns to get used to the start zones and braking zones and then two attempts to reach 200 mph.  It may sound simple, but most of the 16 participants did not hit 200 mph in any of the four attempts.  I took the Mercedes SLR and hit 197 mph on my first test run.  The SLR is an automatic (no paddle shifters that I saw) and was hard to keep in lower gears when coming out on to the airstrip.  After hitting 196 mph in the SLR on my second attempt and noticing that no one was doing well with the car, I decided to switch to the Lamborghini LP560.

I jumped into the LP560 and mentally prepared myself for the turn out onto the airstrip.  I knew this turn at 60 mph was critical to hitting 200 mph and made it the main focus of the launch.  I lined the turn up well, tapped my brakes to load up the front end to improve the steering and accelerated evenly out to the widest end of the airstrip.  It felt like an excellent launch.  Much better than the downshift that had happened in the SLR.  As I went up a few gears, I realized I was so focused on the turn onto the airstrip that I did not have my seatbelt buckled!  I did not let this distract me.  The car has airbags and I wasn’t planning on using them either…

As I raced through the braking zone and brought the car back to reasonable speeds, the instructor next to me exclaimed, “200 mph!”  I was the first participant to hit 200 mph and the only one to do it in the first three runs.

All of the sudden all of the drivers started using the Lamborghini LP560 as I had done and a few more hit 200 mph on their 4th and final try.  One of the drivers hit 201 mph!  While I was the first, I was no longer the fastest.  This was disappointing – but I did have my fourth and final attempt left.

This time as I prepared for the final run, I buckled my seatbelt.  I was ready and again had an excellent launch out of the turn onto the airstrip.  I took the LP560 through its gears and kept the gas pedal smashed to the floor as I roared through the braking zone.  The instructor yelled, “202 mph”, as I turned off of the main airstrip.

If speed fills your need.  Then World Class Driving is the way to do it.  The professionals there make sure you and all of the equipment are ready for the exercises – the rest is up to you.  If you just want to try driving the world’s greatest exotic cars without going 200 mph, World Class Driving also has some other touring programs that may even be more local to your hometown.  I took one of their tours in May of this year and really enjoyed it.

Click on one of the photos below to open the gallery. 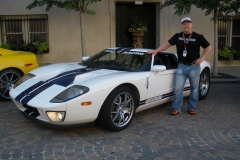 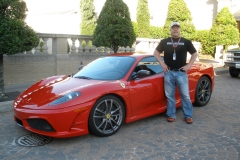 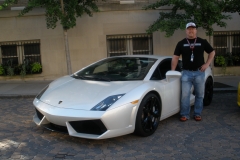 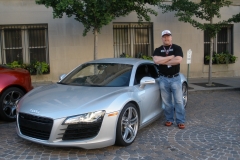 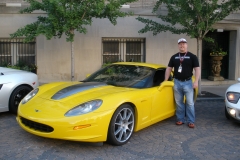 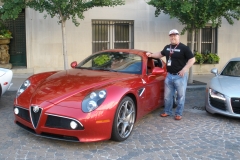