Ted Cahall and Cahall Racing kicked off the 2018 MARRS racing season with the MARRS 1 2018 weekend.

Getting to the Track

Flights were delayed coming out of MN due to mechanical issues with Delta.  An hour and 45 minutes later than planned, I was on my way.  Normally this would not be such an issue, but I had a dinner planned with a long time friend and his wife.  So it was good the delay did not completely cancel that portion of the trip.

I had a really nice dinner when I landed in the DC area with U.S. Army General (Ret) David Cole and his wife Connie at Morton’s Steakhouse in Reston.  A great couple and a man of great service to our country.  I highly recommend the Wagu Filet.  We all enjoyed the company, the food and catching up.  Here is an honorary card the people in Iowa made for one of their favorite military sons. 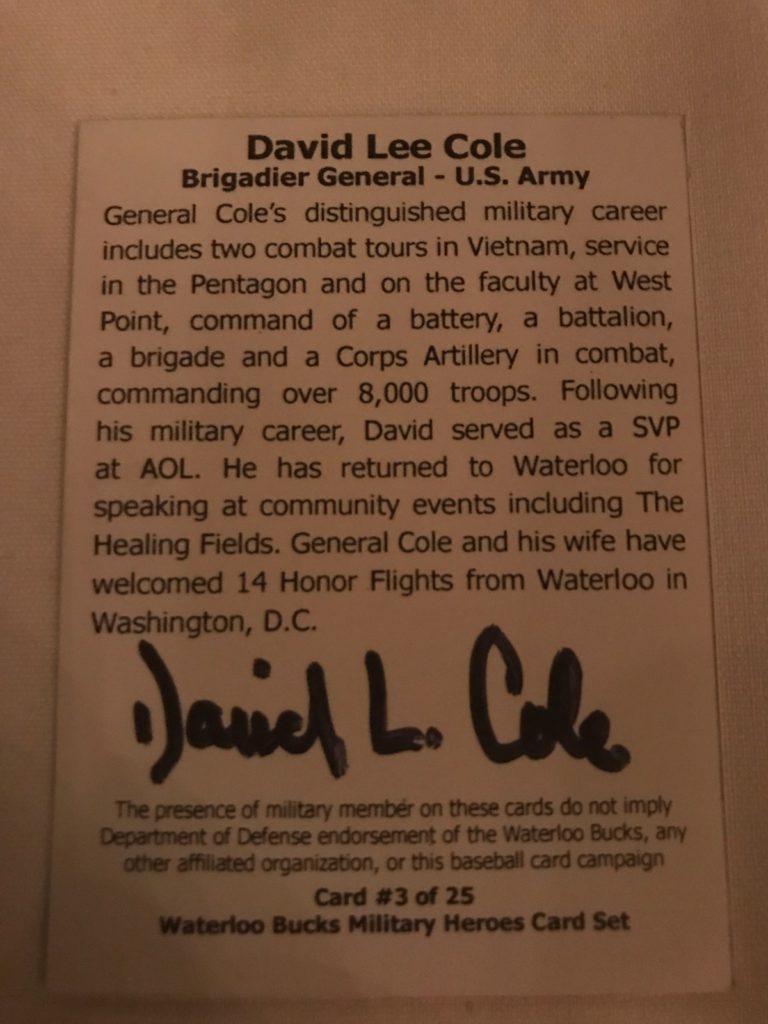 We started the track sessions around 8:30AM and focused on selecting the best of my three cars for the race this weekend.  It has been a year since I was behind the wheel, so the first session was about getting back into the groove without breaking the car or myself.  I chose my blue #80 car.  The car’s steering felt like new bushings had been put in the front end and there was too much caster.  After Ed York went out in a major wreck, we were black flagged off the course.  I checked my tire pressure, and determined I was basically driving on flat tires.  Not uncommon for some checks to get missed as many cars are being readied for the first session of the season.

The second session was great.  The #80 car handled much better and the “caster” issue has gone away.  I turned a 1:27.2 – which would have been fantastic for me especially after a year without racing.  Except the track had just been completely redone and was now by all accounts “faster”.

The third session I switched cars to my #79 backup.  It needs to have the heel plate moved and caused me to not be as comfortable as the #80 car.  I was working my way through the session and noted it was “looser” than the #80.  Unfortunately, coming into turn 1, the engine started to make a noise.  By turn 2 I realized the engine was blown and drove off the track so as not oil it down for the drivers behind me.  That just made the car selection process a bit easier (and unfortunately long term costlier).

The fourth session was interesting.  Ted was back in the #80 while Nick Bruni tried to shake out the #78 VVT model.  Unfortunately the radiator hose came off the #78.  Nick brought the car back in to protect the motor.  The cars were winterized and this should have been caught.  It could have been a very costly error had Nick not been so perceptive.

The fifth and final session of the day produced 7 laps in the 1:27 s with the best lap at 1:27.3.  This was not too shabby since the temperature was hotter which usually implies slower lap times.

Amazing – a Friday the 13th practice day with only one blown engine and no totaled cars!

I expect the track record for the SM class to fall tomorrow morning.  Some of the drivers ran a 1:25.9.  It will be an interesting weekend!

The day started with a bit of chaos as it was the first day of bracket racing with marrspoint.com.  Once I had the race ID and the race-monitor.com relay was restarted, we were good to go and the folks in timing and scoring were able to watch the brackets develop.  Success!  Congrats to Chuck Edmondson.

Qualifying was interesting.  I started 14th of 31 cars on the grid based upon running one event last year.  I was running faster and faster laps with my last lap a 1:27.156.  My predictive lap timer let me know my current lap was a 1:26.8.  The holy grail!  The first lap in the 1:26 range for me in at least 3 years.  In turn 7, I see the black flag come out.   That means the lap is over and all drivers must pull into the pits.  Foiled again!  It turns out I qualified 8th of 31 drivers.  Hitting that 1:26.8 would have only put me in 7th place. Upon stopping in the pits, I was informed the driver sitting on his roof that caused the black flag was a very close relative of mine.  Well, I hope the car is OK! 🙂

I jut got word from the home front in Minnesota.  Here is what the weather is like this morning.  Good thing I am racing in DC in the 70s.

My relative survived rolling his car over on its roof (really slowed his lap down).  However, chasing him down in “medical” caused me to miss the driver’s meeting.

The race was less enjoyable, I was hit by another driver that was passing me in a two car freight train in turn 1 of lap 2.   It impacted my concentration and caused my Traqmate to turn off (which I use for my shift lights and predictive lap timer).  I then missed a shift in turn 8 and dropped cars at both of these points.  I ended up finishing 12th after starting 8th.  That is considered a bad day at the track.  I was waiting for the driver that hit me to come and discuss (and hopefully apologize).  Instead,  I was notified that I was being called to talk to the officials as he posted an official protest saying I hit him.  This is really a good part of why I did not race much last year.  It really takes the fun out of racing.  At Meathead Racing, it is called “Man Drama”.  I talked to the officials, filled out my mandatory paperwork and handed them my video.  Final ruling TBD.  By the way, the officials were super professional and polite – even the ones from New Jersey (that was a polite dig on New Jersey – could not resist).  All of the officials are volunteers and the last thing they need is a bunch of man drama.  They have real racing issues to handle.

To top it off, the weather in MN had the airport closed all day, and my flight home Sunday night has already been cancelled.  You can’t make this up.

I got called back to meet my friendly local officials this morning.  They ruled that I was not in the wrong and the other driver’s protest was ruled invalid and dropped.  It does turn out that the driver’s meeting I missed yesterday when I was at medical with my relative “the car flipper”, stated that any car to car contact required both drivers to come to impound.  I did not go to impound as that was not the rule in previous years.  Possibly this issue could have been resolved there without paperwork.  But this is not the first time this driver has behaved like this towards me.  This type of behavior can be why racing is less fun than it should be. In the end, other than wasting my time, the right answer was reached.  Truly I feel he should have been penalized as he was the overtaking car and I left him racing room.  The rules state the the car in front must leave racing room, and the overtaking car must complete the pass safely.  I did my part, he did not do his part.  Why he filed a protest is beyond me.  I did not bother with a protest.

The Sunday race was 20 laps.  There was a delay in group 5 and it seemed like the race might never start.  The temperature had dropped at least 15 degrees in the last couple of hours and it looked like rain was imminent.  Lower temperatures mean more horsepower for the cars and more comfort for some of us “less slim” drivers.  But rain is really not a great addition to the sport.  Frankly, I am a terrible rain driver.

I started in grid position 8 as I had on Saturday.  The start was mostly uneventful and I was able to hang with the grid leaders through turn 5.  By the end of Turn 2 I had started to gap the cars behind me.  That was a good feeling.  I hoped they all started to battle it out among themselves back there as it slows them down compared to my times running without contention.  By turn 10 it was clear the gap was getting larger.  I was hopeful I could maintain that gap and would be completely satisfied with an 8th place finish in this field of 31 cars.  Then my Traqmate gave out again.  No data.  No shift lights.  No problem.  Unlike yesterday, I did not consider turning it back on.  I put it out of my mind and shifted by the sound of the engine.

Then the light rain started – and we were in slicks.  I was praying that it would blow over.  I know John Hotz is an amazing rain racer, and I expected to see him in my rear-view mirror very soon.  The rain never really materialized.  It was just going to mist a bit and give up.

I bump drafted Ryan Heishman whenever I could make it up to him, but I did not even consider passing him.  I wanted to keep taking that draft and making the gap behind me larger and larger.  I chased Ryan for about 18 laps until we lapped a car.  He squeaked by the lapped car and I was blocked for several turns which allowed him to pull away for good.  No problem – I was still in the position I started and no one had passed me all race.  I was happy to see the 1 lap remaining sign at start / finish.  I knew I just had to keep the car on the track and I was in at least 8th place.  I finished and heard that Rob Hines had pulled off with car problems.  I took 7th place and had run a fast lap of 1:26.710.  That is not the fastest lap I have ever had, but the fastest in 3-4 years.  The track was faster and the temps were conducive to records.  I was feeling great until I noticed Mike Collins (Meathead) had set the new lap record with a 1:24.886!  Holy smokes.

It was a good weekend after all.  7th place, six laps in the 1:26s (and two more at 1:27.004) was not a bad day.  No on track incidents aside from a minor bump when a lap car stepped on his brakes in front of me (we cleared that up with video – no officials required).